No, I didn’t just do my A-E steps and rejoin the Church of Scientology. While the primary purpose of my traveling from Oklahoma, where I live, to Los Angeles in June of 2021 was to attend a memorial service for two of my friends that had passed away, I also wanted to visit old friends. 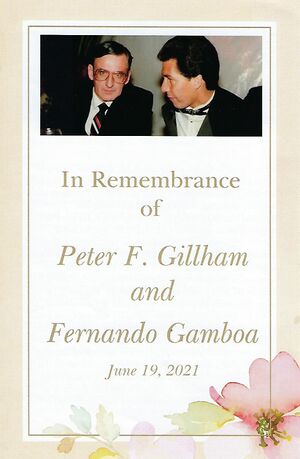 I had extended my trip, June 17th to June 20th, so that I could visit old Scientology locations that I had been at during my time in Scientology in the 1970’s. I had also planned on looking up my Scientology friends that I knew back then and who were still in Scientology, namely Mark & Marilyn (husband and wife, Marcia and Sara).

After renting a car at the LA airport I drove over to the piers at San Pedro. In the 70’s a Scientology Sea Org ship, the TSMY Excalibur, was primarily docked there. Because I had signed a Sea Org contract in 1973, I was sent to the ship that summer where I did my Sea Org Product 0 Course. Then from February 1974 to February 1975 I was on the Excalibur as part of its RPF. 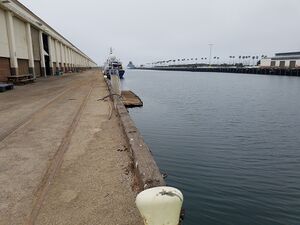 The two buildings on the south side of the slip were mostly empty and the location was fenced in. Luckily, the west building had a tenant and the gate to the water was unlocked. I managed to take this picture which shows where we were tied up in 1974 to 1975. This is where we were when Larry Wollersheim had tried to escape from the RPF. 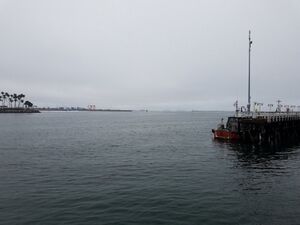 My next stop was where, in 1969 at 1809 west 8th Street, Yvonne Gillman established Scientology’s Celebrity Centre (CC). This building now houses a Mexican grocery store. 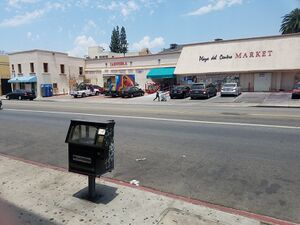 While parking and walking these streets was troublesome, due to the homeless either napping or wandering around, I decided to enter the store. I was amazed at the small size of the inside and wondered where Yvonne found to put all of her staff. At one time CC was the largest Church, by staff members, on the planet! In 1975 I sat of the floor of this building during a CC event while Heber Jentzsch read to us the LRH book “Hymn of Asia”. 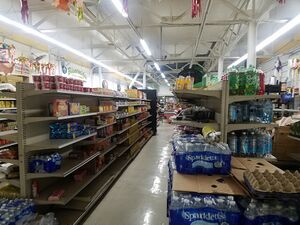 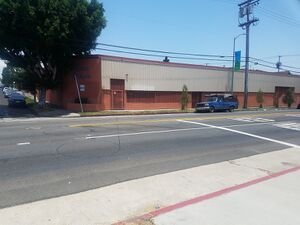 From CC I drove over to 2723 Temple Street, where Scientology’s ASHO was first located. This building now houses a Dialysis center, so I was unable to take a look inside. A new front wall had been added on the Temple street side, but when I peeked inside, the stairs leading up to the front door were still there. The building and grounds looked well maintained. 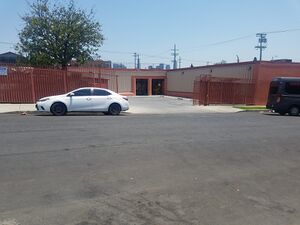 It was in this very rear area where, in 1974, the Excalibur’s RPF was called in to handle a Hill 10 at ASHO. When we first arrived there was a mountain of unopened mail bags piled up on the outside of the building. We spent several days filing this mail, until we ran out of file cabinet room, with more mail yet unfiled in that pile. 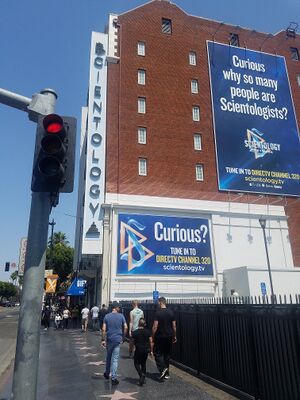 The next stop was to an active Scientology site at 6724 Hollywood Blvd. In February 1975, after I had graduated from the Excalibur’s RPF, one of its staff, Bill Yaude, gave me a ride into LA. It was lunch time so he and I got in line for a meal. The server had no idea who I was and promptly protested me being there, that is until Bill vouched for me.

This part of town was rife with homeless people, so much so that I did not feel comfortable parking my rental anywhere near this building. I paid twenty dollars to park in a parking lot in the same block as this Scientology building.

The building was closed to the public for renovations with its windows covered inside with paper. I told the security guard my story from 1975 and all that I wanted to do was take a look inside to compare it to what it was like during my last visit. When Bill and I were there the wall studs were showing and cockroaches dominated the rooms I had gone into.

Despite my pleas I was not allowed to go inside. But I was having a good conversation with the guard so I asked him if he knew any of my old friends. He thought that my friend Mark may have his office at the Scientology complex at 1322 L. Ron Hubbard Way (Big Blue as I used to call it).

My total time at the Hollywood Blvd. Building may have been less than 15 minutes at which time I went back to my rental. What a waste of twenty-dollar parking!

Parking was at a premium near Big Blue, however I did find a good spot on one of the side streets. I had to walk several blocks to get to the building and tried to enter the first door that I had come to, LA Org. Even though I had my immunization card for the Covid Virus I still had to sterilize my hands, glove up and have my forehead temperature read. I was too hot from my walk and was told to sit in the shade to cool down. When the temp checker wasn’t looking, I put the hand sanitizer on my forehead which cooled it down enough so that I could enter the building. During my wait I noticed a few FSM’s bring in new public to the LA Org. 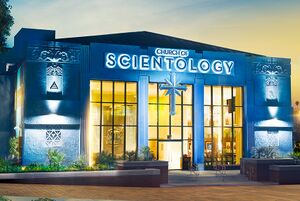 After signing in I was so very fortunate to have the help of a very friendly lady wearing a Clear bracelet. I told her my story, that I was in L.A. for just a few days, and that I was trying to find some old friends. She went out of her way to locate my friends and was successful in finding Mark at the Inglewood Org. She gave me the telephone number and I called the Org around 3:30 pm. When Mark got on the line he was excited to hear from me and we decided to meet after he got out of class at Big Blue around 10:00 that night. Mark gave me the number to his wife, Marilyn, at which I had to leave a message for her to call me when she had a chance.

I was elated and left LA Org headed for my car. As I as passing ASHO I thought that I would try my luck in finding some more of my friends in there. Their receptionist was cool to my story and directed me to a chair to sit in while she found someone to help me. I was hyped, so after sitting for a few I got up and wandered around looking at all the books and CD’s on display. I noticed a plaque on the wall and moved towards it. The receptionist told me not to walk that direction, but when I told her all I wanted to do was read the plaque she allowed me to continue.

After reading the plaque I noticed a lady walking towards me who was wearing a frown. I told her my story of looking for old friends to which she replied that we should go back to the LA Org. I told her I had just been there and they had been a great help, but after perceiving her ridge growing, I knew she was going to be of no help. I told her that I was headed to dinner instead. As I walked away, I could feel her eyes boring into the back of my head, and when I turned to look she and a security guard were talking and looking at me.

I was elated and could not wait to see Mark later that night. I met Mark in 1973 when he became staff at the San Diego Org. At one time he was my roommate where I was living, I was his auditor after I got back from the RPF and in 1976 he and his wife, Marilyn, were my best man and maid of honor at my wedding. My wife had blown the church to have our son, and I still have the picture of Marilyn sitting next to my wife and new son on January 1, 1978. Mark was in the living room. In the 1980’s they stopped off at our home in Oklahoma for a visit, I had to be at work and regrettably had to miss them. So, seeing Mark after over thirty years was going to be one of the highlights of my trip. 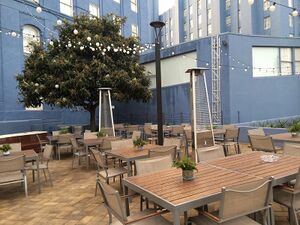 I arrived at a bit after 10:00 that night. Mark was no where to be found and I was worried that I may have missed him. I sat in an outdoor sitting area facing the street. While I waited a security guard walked up and started talking to me. A few minutes later Mark walked right past me, he was not more than five feet from me, and said “I can’t talk to you, I didn’t realize who you were associated with”. That was it! I watched as he crossed L. Ron Hubbard Way and continued to walk into the OTL building, never once turning to look at me. What a sad sad event, a terrible end to my day. Marilyn never did call me. 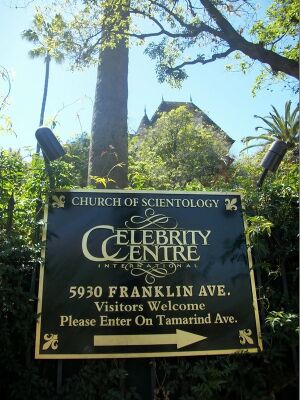 The next morning after breakfast I went over to Celebrity Centre International at 5930 Franklin Ave. I had in my possession my RPF graduation certification and FLWUS ED# 320 dated August 15, 1974 which named all the people who helped get the Hollywood Inn (now CC Int.) ready for FOLO’s move into its basement. I had helped, as part of the RPF, by removing trash and scraping paint for the few days we were there.

I walked around the outside of the grounds, which were immaculate, noticing that this friendly place could not be entered by the front door. When I got to the entrance to parking a security guard met me. I showed him my documents and told him I was an old man, 67 years old, and all I wanted to do was look at the places I had scraped off paint in 1974. He asked me for my name, moved off and talked into his headset. He then approached me and informed me that I had been declared and was not allowed entry to CC Int.

In December 1977 my five-year contract with the San Diego Org expired. I took the time to find the proper routing off staff form and completed each and every step of it. I had served my promised time and left with no freeloader’s debt and as a Scientologist in good standing. My crime to Scientology is being friends with people who have left the Church, many of which had held important positions in Scientology.

That day something in me with regard to the Church of Scientology snapped. I was through reaching out to my friends who are still active in the Church. I knew that whoever I tried to approach I would get the same result as I got from Mark. They will always be my friends and I am always here for them, but they will have to be the ones who reach towards me. 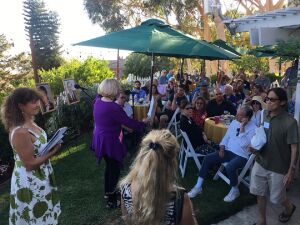 On the 19th of June, 2021, I joined with over 110 wonderful people, many who are ex Scientologists, in remembering the lives of Peter F. Gillham and Fernando Gamboa. That event was the highlight of my trip to Los Angeles!