DL - Knocking Off Hats From a Distance on Solo NOTS

Approximately 20% into this rundown I went to get gas at my usual spot, a very busy multi-bay filling station/convenience store. I pulled into one of the fueling bays behind another car that was filling up at the forward pump. When I stopped and turned off my engine, and as I emerged from my car, I was assaulted by incredibly loud rap music booming from the car in front of me. I mean it was loud, so loud it almost hurt and was definitely unpleasant. The driver of the vehicle had recently arrived too and was just beginning to fill his tank.

This man was a very intimidating presence, I'm talking NFL Linebacker type size and not only looked like he had done some "hard time" but was ready and willing to commit mayhem at the drop of a hat to get back there. He was obviously just waiting for anyone to challenge him about the noise coming out of his car and gave me a look that communicated such in our micro-second first look at each other. 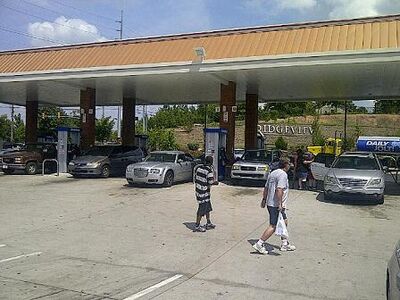 Actual gas station where this occurred

Due to the NOTS I had already handled at that point however, rather than me presenting him with my very best ridge and sour demeanor I had cultivated for so many years as a means of handling such encounters, I instead presented him with the absolutely most beatific and benign, ridge-less greeting I've ever given anyone. I simply confronted him, and since no verbal communication was possible with the noise emanating from his car, put both hands out, palms up, in a questioning and pleasant manner.

The gentleman digested this no ridge, non threatening comm and calmly turned around, leaned into his car and turned off the music. He then turned back to me and said simply, "since you asked so nicely".

I thanked him and we both went about filling up our cars.

A moment after this drama had played out, I got the most perplexed look from another driver at an adjacent bay, as if to say to me, "what the hell did you just do?". lol

That was one of my first dramatic and definite validations that I was in fact, changing. It's one thing to subjectively see and feel the charge and case being handled, and another to have it demonstrated out in the real world with other people.

Some like to say: "well, he can't 'knock a hat off at 50 paces', so where's the proof of OT powers?" I kind of chuckle at the thought that in fact, I did knock that guys hat off...whatever hat he was wearing at that moment. :-) DL