ː This Page is by no means complete. If you have further data or corrections, or more relevant pictures, please contact:ant.phillips@post8.tele.dk

On June the 15th 1983 the postman delivered a letter through the door of my small flat on the fourth floor of a building 13 kilometres north of Copenhagen. It was a rather thick package. It contained a long rather poorly duplicated letter signed by "Dane Tops".

At the time I was an outcast from Scientology. In March, after a weird procedure in a Scientology organisation where I had to write up my overts (discreditable actions) I was sent to somebody who was called "The Ethics Officer" and she told me that I was a Suppressive Person[1], that I was to go out, not to talk to "anybody" except herself until I had found my overt and reported into her.

I had come to Denmark in 1969 as a Scientology staff member and had not made any non-Scientology friends in Denmark. I was somewhat alone. I had managed to find a better job than my previous one as a badly paid "night watchman" in a tiny taxi firm. Rather fortunately as you will see later the new job concerned duplicating plans and papers.

I read the Dane Tops letter through thoroughly and with a certain amount of surprise. I knew someone (Bill Remak) who had also been declared a Suppressive Person and lived nearby. I spoke to his wife for a few minutes before he came home from work. Bill read it through (to my mind very superficially), handed it back to me and said: "If you send this to anybody do not put your name and address on the letter".

I did send it on to four or five people, carefully not putting my address and name on, and the day after I sent it Maiken Borre rang me up and asked me if I had sent it, to which I answered yes. The result of this was that some communication got going on the subject. A little group of people got together. Apart from me they were still officially in the Church of Scientology and risked being similarly thrown out if it was known that they had talked to me. It was agreed that we should meet weekly in my flat (which was regarded as "neutral ground" and therefore not liable to be watched by the Church of Scientology, which sometimes got referred to as "Cof$"). Those that met up weekly were:
Scott Leland deceased,
Ole Smidt now deceased,
Maiken Borre/Morrel, now deceased,
Jens Nissen,
Ole Gerstrøm. 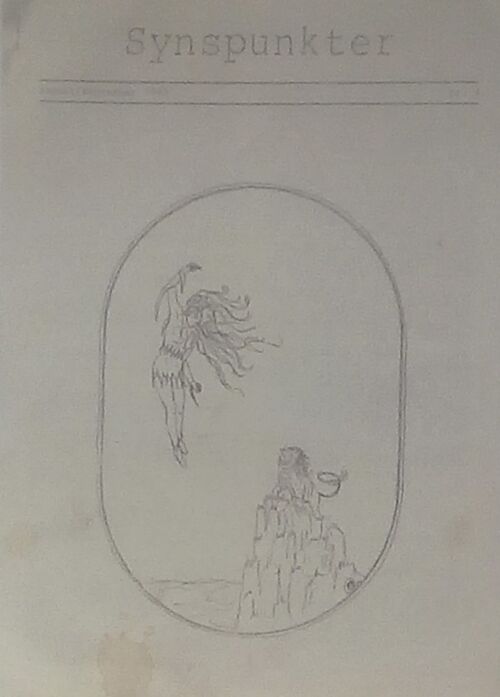 At that time a roving registrar from the AOSH EU and AF (Marie Maloney) had left staff there, disgusted at how she saw people being treated. She had with her addresses of AOSH's clients in some major European countries and information packs informing of activity outside the Church of Scientology were being sent out by other FriScientologists to those people explaining what was going on in Scientology and outside the "church". But we did not have addresses for Scientologists in the Scandinavian countries. We therefore formed something which we called "the Europaiske Informationcenter" (in Danish, shortened to DEI, letters which had a meaning in Scientology, there was a scale including the steps desire, enforce, inhibit). The DEI sent information packs out to these addresses giving information that Scientology was available in Scandinavia outside the official Co$.

Maiken had some connections with the press, but did not want to appear herself in an interview. Maiken had been the Qual Sec in one of the two local level IV Scientology organisations. She arranged for me to be interviewed by one of the morning newspapers (called, funnily enough to Scientologists who know the upper auditing levels, "BT"). It duly appeared in an inner page article of BT with a large picture of me. (Picture of that needed, anyone care to research BT's files?)

The little group that met in my flat contained people with varied and different international Scientology connections. Each week we collected and talked about news from different areas. One thing I remember about those meetings was that Scott Leland seemed to say at every meeting that he expected the church would have collapsed by the next week's meeting. We did however more than collect news - in all we had collected about 40 international addresses. I had a job where, in return for my doing overtime when needed, I was able to make photocopies. When we got a sufficient number of written documents from these 40 terminals across the world, I would photocopy (duplicate) copies of each one and send them off to each of these 40 terminals.

The little group that met in my flat stopped meeting after about a year (I cannot remember the details of that). However other activities were going on.

There were a number of English-speaking FriScientology magazines. Probably the first one in Europe was called Reconnection. It came from England and was edited in the beginning by Jon Atak and I believe you can find it on the Internet[2]. There was an English-speaking one which originated in the German speaking area called Comm Line. In the USA Mark Jones started a magazine which he called "Free Spirit"[3].

It seemed there was demand for a magazine in Danish. There was a lot of talk about it but nothing got done for a while until Søren Werk took the bull by the horns and organised something. He worked for a computer firm, was able to get the use of the firm's premises and equipment in the evenings and organised volunteers typing mailing lists and articles. Thus he started the Danish magazine which began with the title Synspunkter, meaning Viewpoints. A local man, Ivan Tønder, who ran a small printing works, initially printed the magazine for free (later we paid half price). Later it became called Uafhænge Synspunkter, meaning Independent Viewpoints. The change was because we wanted to send it through a cheaper post office service which already had a magazine Synspunkter run by a firm of opticians (optometrists).

There was a move to get Ron's eldest son, Nibs Hubbard, to come over and give a course, apparently on exteriorisation. It was later learned that he intended to use drugs on the course so it got a bit frowned upon but then he became ill and died so it did not happen.

Another famous person who did come was Bent Corydon, [[1]] who actually was born in Denmark. Bent came and gave a talk at Ole Gerstrøm's place (of which a cassette tape was made). This was announced widely and there were people who did not want to go to it because it had been announced widely and they did not want Scientology organisations to know that they were interested in it. So I invited Bent to give the lecture again in my flat. It is a small flat with a door between the lounge and the bedroom. We had to leave this door open because they were so many people that we could not jam them all in the living room.

Additionally an organisation was set up. At first it was in Carsten Riddersholm's basement. The tech side of it was run by Pierre Schiøttz. Two NOTS auditors came over (Merril Mayo being one of them). Maiken Borre also had a tech activity running in her flat.

Why was Dane Tops sent to me[edit | edit source]

I came to Denmark in 1969 as a member of the Publications Organisation. I left it when my contract was up in 1972 (? 71). Got a job printing for an insurance firm. Continued my OT levels. Engaged in some Scientology activities like running two Scientology MiniGroups and I was Registrar of the (field) Auditor's Association when it was started in the seventies. I had a spare bed and lived just over 10 kilometres from the AOSH EU and AF (senior Scientology organisation for Europe and Africa).

People who were coming from other European countries and Africa for upper Scientology levels and training and needed a place to sleep and in some cases to do solo auditing. So I rented the bed and other facilities out to Scientologists visiting Denmark.

One of them was John XXXX (name forgotten). He was a New Zealander, married to an American. He worked on an oil rig in the North Sea as a paramedic working two weeks on the rig followed by a week free. He spent his free week on the Saint Hill Special Briefing Course at the Saint Hill in Copenhagen where in 1980 and 1981 I was also a student.

This occurred before the days of personal computers with their scanning machines. Copy machines using toner were somewhat in their infancy and the quality was not always good. When you copied something the copy was usually slightly larger than the original. The Dane Tops letter was copied many times and because it got enlarged slightly every time the last lines on each page of the later copies were lost or only partially there.

For re-typed version of the Dane Tops letter go to [[3]].

"I think it needs a conclusion. I would suggest your opinion on how much the DT letter changed the Scn field. This article started with an introductory para from you and i think it fitting it should end with your conclusion. It really does need that I would say to finish the article off." (Proofreaders note)

Anonymous author(s) of a long letter explaining what was happening inside the CoS and the Scientology activities going on outside, causing many to leave. About the turn of the year 1982/1983.

2. a person who rewards only down statistics and never rewards an up statistic. He goofs up or vilifies any effort to help anybody and particularly knifes with violence anything calculated to make human beings more powerful or intelligent. A suppressive automatically and immediately will curve any betterment activity into something evil or bad...More

An intentionally committed harmful act committed in an effort to resolve a problem. (SH Spec 44. 6410C27)

In a Scn org, the person signs up people for Scn service (HCO Admin Ltr 30 Jul 75)