"Mayo was born on November 19, 1940 in Taumarunui, a small town on New Zealand’s North Island. His father was a nurseryman and outdoorsman, and Mayo inherited an abiding interest in nature from his parents. He had three sisters, two of them from his father’s previous marriage.

Mayo was a top student at Taumarunui High School, but it was there that one of his teachers introduced him to both theosophy and Dianetics, and by 1959 he was working for Scientology in Auckland and began corresponding with Hubbard."[1] 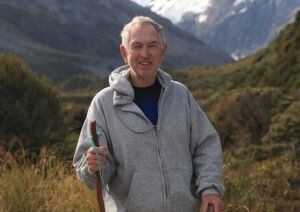 David started his career in Scientology in 1959. He did the Saint Hill Special Briefing Course at Saint Hill UK, directly under LRH. He joined staff and worked closely with LRH. When LRH had a pulmonary embolism in 1978, while instructing Tech films at Golden Era Productions in California (La Quinta, near Palm Springs), Ron requested that David Mayo be brought to the GEP to audit him. Ron’s physical condition was critical and his physician Gene Denk, did not dare put him in an ambulance, as he feared the trip would kill him. Auditor Jeff Walker was suggested to audit Hubbard, but he (Hubbard) said “No, send David Mayo”. And so David Mayo was put on a flight immediately. He managed to audit Hubbard to full recovery, and in the same time developed NOTs together with Ron. He was posted as Snr C/S International by Ron personally. As Mayo went off to LA to assume his post duties, Ron continued with solo NOTs and researched further into this area. After the new Management took over in 1981-82 David Mayo soon witnessed criminal activities and alterations of the Tech. He also discovered and voiced against the implemented price increases. This was not popular and he was sent on the RPF and later SP declared.

But before that, in 1981, he received a detailed letter from LRH assigning him the Tech hats for the next 20-25 years as LRH was planning on leaving his body within a couple of years and return back in his next life.

Naturally the declare of David Mayo created enormous enturbulation in the field of Scientology as Mayo was well reputed and a stable Tech terminal for Scientologists around the world. An issue was written to “clarify” the situation called “The story of a Squirrel”. But it could not calm down staffs and publics and a Mission was fired off to explain further. It’s main message was that the reason why LRH did not discover that Mayo was an SP, was that LRH was such a big thetan, that all SP tendencies and case would vanish in his presence. Therefore it was not possible for LRH to discover that Mayo was really an SP. The out point that there is nowhere any HCOB or tape lecture where LRH states that a big thetan cannot spot an SP, was somehow not-is’ed. In actual fact, I know of no Tech where LRH mention this phenomenon at all. And if it was true, how could LRH then develop the extensive SP/PTS technology? How could he ever audit a PC if all case would vanish in his presence? No, it definitely does not make sense, it is Out Tech and clearly illustrates that the real reason for David Mayos declare remained well hidden.

That David Mayo wrote the majority of the NOTs bulletins is very likely to be true. I have personally checked through the more than 50 HCOBs in the “NOTs Series” all of them (except two) has mention of DM in the copyright notice at the bottom:

Some of them even states: L. Ron Hubbard assisted by Snr C/S International.

I have studied some of the materials later issued by David Mayo (Advanced Ability Center) and his way of writing matches the way of the NOTs bulletins. He has a different style than LRH. He is more gentle and more careful in his approach. LRH is much more crude and direct. I mentioned this observation to my Class IX auditor and he said that he had never been in doubt as to whether Mayo is the author of NOTs. Not necessarily the source, but certainly the author.

Read here David Mayos article on the development of NOTs and auditing LRH.

From AOSH EU, I know that their NOTs pack was stolen in 1983. Three people in full Sea Org uniform, showed up and claimed they were from RTC. They wanted to inspect the NOTs materials which were then given to them. They went into an office to “inspect” it. After lunch time, the org terminal (AO C/S) who handed over the NOTs pack, looked for the “RTC Inspectors” but did not find them. They were gone and so was the NOTs pack. Many have connected David Mayo to this theft, but was he? More about that here

It is interesting that the highest levels of OT delivered by the Church is in fact written by a person who was later declared suppressive.

It is also interesting that the Chairman of Mayo’s Com-Ev was Ray Mithoff who would later take over Mayo’s post as Snr C/S Int. John Eastmann was in between and maybe one more for a short notice.

The first "Independent" group. This video is a bit long but vital to understanding the impact of the Sea Organization on the Scientology movement.

After he left the Church of Scientology David wrote an article on Clear. Scientolipedia has it at the following link [[1]].

An advanced Scn course available to Sea Org auditors only and is taught on Flag. It teaches L-12, the Flag OT executive Rundown. (Dianetics and Scientology Technical Dictionary (C) 1975)

Suppressive Person: 2. a person who rewards only down statistics and never rewards an up statistic. He goofs up or vilifies any effort to help anybody and particularly knifes with violence anything calculated to make human beings more powerful or intelligent. A suppressive automatically and immediately will curve any betterment activity into something evil or bad...More