Richard (Dick) Coanda, (October 2, 1931 - January 6, 2014) an educator with a PhD in English, is best remembered as ASHO's Saint Hill Special Briefing Course supervisor and word clearer. He was a member of the Sea Org for twenty seven years and was on the RPF three times. Dick and Lori Coanda were married for over fifty-eight years, a novelty within the Church of Scientology. 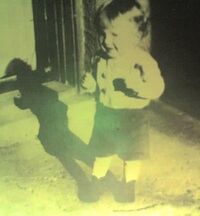 While his hometown was Cudahy, Wisconsin, Dick graduated from South Milwaukee High School, class of 1949. When Dick was eighteen years old his mother ran way from home and met a handsome tattooed man who told her he had a job and a car and owned his own home, none of which was true, as she learned after marrying him. She moved in with his parents, who lived in a Rumanian neighborhood.

Dick attended Marquette University as an English Major. In 1955 Dick married Loraine, a marriage that would last fifty-eight years. He graduated with a PhD in Literature at the University of Wisconsin. During this time period Dick was active in the Cursillo Movement in the Catholic Church and served as editor of a small Cursillo newsletter called Ultreya. He was a copyreader for the Milwaukee Sentinel, junior editor of Renascence: A Critical Journal of Letters, editor of the Newman Review, author of more than a dozen articles and reviews for learned journals.

He moved his family to Los Angeles where he accepted a teaching position at the University of Southern California.

Dick found out about Scientology in 1968 and started attending evening classes at the Church of Scientology of Los Angeles, 2005 West 9th Street. In 1969 Dick moved his family to San Diego where he went to work at the University of San Diego. He gave intro lectures at the Scientology College Avenue Org. On April 17, 1970, Dick, as an associate professor of English at the University of San Diego and a devout Roman Catholic, wrote a letter of support for Scientology (see copy of letter to the right). This letter was eventually reprinted in Scientology's 1974 publication of the book - "Scientology: A World Religion Emerges in the Space Age". The reprint of his letter can be found on page twenty-one of the appendices section of the book.

After 3 years Dick quit his job at the University and joined the Sea Org at AO. He was all ready to move back to LA with his wife and children when the position was cancelled. Dick had everything ready for the move including the cutting off of his phone. His phone was cancelled during his conversation about his move to LA. He took a job at the Church of Scientology of La Jolla (incorporated April 8, 1971) but was off loaded. He held various jobs, one as a manager of an “out of town” newspaper store and one as a short order cook at the cafeteria for mechanics at PSA Airlines. Dick was also the HQS Course supervisor at Carl Barney’s Scientology Coordinated Services mission on 10th Street. When the mission and the Church of Scientology of La Jolla merged, in February 1973, Dick moved his family to LA where he worked as a Sea Org member at ASHO as the Briefing Course supervisor. In a Scientology publication of 1973 Dick was featured as a supervisor of the Saint Hill Special Briefing Course at ASHO (see two pictures in the picture gallery).

In early 1974 Dick was assigned to the Sea Org's RPF aboard the Excalibur. In August the RPF was pulled off of the ship to make the newly acquired Chateau Elysee ready for FOLO. For days they hauled a bunch of trash out of the basement, after which the RPF scraped and painted. Per FLWUS ED# 320, dated August 15, 1974, the following RPFer’s were commended for their work; 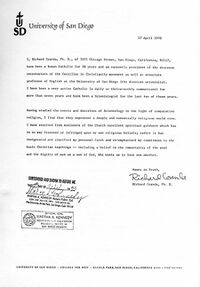 In the fall of 1974 Beth MacRae took a picture of the RPF, during breakfast, on the bow of the Excalibur. Dick is pictured with his back to the camera. In January 1975, Dick wrote a commendation (see below) to Howard Dickman, which was used in Howard's RPF graduation CSW. Dick graduated from the RPF and returned to ASHO.

On July 4, 2010, Dick was interviewed by David Thomas about his time on the Excalibur's RPF. At time stamp 6:19 to 6:30 Dick had this to say about his Excalibur RPF experience - "The first time I was gone for eleven months. I was aboard the Excalibur, that was a lot of fun actually. I lost thirty pounds. They didn't feed us well, didn't feed us well at all". His full interview can be viewed here - http://www.youtube.com/watch?v=_NjAyuVLdQ4

In January 2011, after the publication of Howard Dickman's story of the Excalibur's RPF, Dick wrote the following message -

Back to ASHO[edit | edit source]

Towards the end of his time with the Church Dick transferred over to LRH Public Relations as the chief LRH writer. He wrote for LRH internal and external PR and a weekly LRH briefing. During his time there he penned about 50 LRH press releases. Finally he was forced to leave SO Staff at LRH Public Relations. He had not been doing well, getting into long word chains. He caved in and was sent to his third RPF, which he was in for over a year. In 2000, after a twenty-seven year career with the Church, Dick was offloaded.

Life after the Church of Scientology[edit | edit source]

Dick lived in the apartments right across from Celebrity Centre International. He spent six years running a TV show that promoted Scientology. Dick was an officer of four different Scientology Gung-Ho Groups; a writers club, a poetry club. He was part of a Celebrity Centre poetry club and was invited to give a poetry seminar. Ten minutes before his scheduled time he was informed by the Church that he was not allowed to be on CC's premises. After twenty-seven years of service with the Sea Org he wasn't even allowed to get a cup of coffee at the Scientology Church right across the road from where he lived. When Dick found out that David and Aida Thomas were part of the Free Zone he came over but had never officially left the Church of Scientology. In 2010 when he was interviewed he was in the process of writing his eighth volume in a series of hilarious sci-fantasy novels, each about sixty thousand words long. He still strongly considered himself a Scientologist and was living according to the principals of his religion. His full interview can be viewed here - http://www.youtube.com/watch?v=L0BSQ1OvYvI 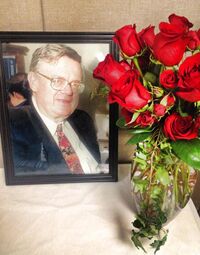 Coanda, Richard died on Jan. 6, 2014, age 82. He is survived by his wife of 58 years, Lori, 5 children, 11 grandchildren and 4 great- grandchildren. He attended Marquette University and earned his PhD in Literature at the University of Wisconsin. Former English professor (Ph.D.) and experienced writer and editor. and 50 press releases as personal public relations officer for L. Ron Hubbard, author or 300 poems and a 10-volume series of satirical science fantasy novels entitled "The Ladder of Love." He was a teacher, writer and poet. Richard's life will be celebrated at Our Mother of Good Counsel, at 2060 N. Vermont, Los Angeles, CA, at 4PM on Jan. 24.

News of Dick's passing spread quickly and many who knew him posted their remembrances of him. I have taken the liberty of reporting those comments here;

A note from the author[edit | edit source]

Despite my relatively short time in Scientology, I had the honor of meeting some very wonderful people. I count Dick Coanda as one of those. He and I grew up in the same area of the Milwaukee suburbs, albeit twenty two years apart in age. Dick was the supervisor on my HQS course in San Diego in 1972. He and I were on the Excalibur's RPF together in 1974 and 1975. Dick had a PhD in Literature yet devoted his working life to Scientology and the Sea Org. I hold him in the highest esteem and I dedicate this biography in his memory.

If you have information about Dick I would be most appreciative if you would share it with me. My e-mail is BlkC5vette@aol.com.

Saint Hill Special Briefing Course. A complete study of all the auditing materials and lectures up to the OT levels. Certification is a "Class VI" auditor.

2. Hubbard Electrometer. An electronic instrument for measuring mental state and change of state in individuals, as an aid to precision and speed in auditing. The E-meter is not intended or effective for the diagnosis, treatment or prevention of any disease. (Scn AD)...more