Jefferson (Jeff) Hawkins was a highly competent young artist specialising in printing and print advertising who met Scientology in the USA in autumn 1967. He was enthusiastic about Scientology, but appalled at the standard of printed promotion the org he went to sent out. With his enthusiasm and skills he sought to help his local org improve the printed materials they sent out. But Hubbard had installed a centralised system, where what Hubbard (Scientology) liked to call "shooting boards" (I don't know if that is a technical term in the print trade, or a Scientology invented term) were made, first at World Wide at Saint Hill England, and from the formation of Pubs Org on the 1st January 1968 at Pubs Org. These "shooting boards", with every thing except the local orgs address and telephone number were sent out to every org, and all they had to do was fill in local details. They had no control over content (which possibly was Hubbard's aim!).

Jeff had no lack of ambition, so he, his brother and a friend, all young hippy type teenagers (I remember they were keen on the Beatles) came to England and arrive at Saint Hill. At that time there was a ban on people coming to Saint Hill to study Scientology, but they knew about this and were able to successfully "disguise " themselves as young hippy tourists, out to see the world. However, when they came to Saint Hill, and applied at reception, they learned that Pubs Org (with me as one of its slaves – I mean contracted staff members) was no longer there. The receptionist and other staff receiving their inquiry would not tell them where Pubs Org was, but did their best to recruit them for one of the two Orgs still at Saint Hill, Saint Hill (providing Scientology services, including the only Briefing Course at that time, and Power Processing) and World Wide, concerned with International Management of Scientology. However Jeff and his comrades would have none of that – they had come to help Pubs Org produce better shooting boards for all Scientology. Asking around amongst other Scientologists at Saint Hill, they found we in Pubs Org had moved to Edinburgh in Scotland – a long way from Saint Hill. Undaunted they took the long train journey to Edinburgh and joined Pubs Org staff. 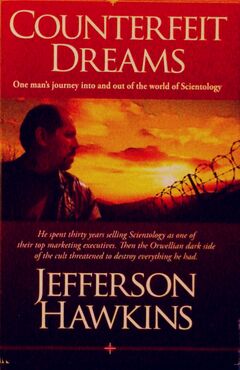 For Jeff that was the start of an over 30 year staff career, where he experienced the common ups and downs of a staff member (harsh), but persisted through this, was able to break down some Scientology policies so as to fit in with the reality of the book trade, and do quite a lot to boost the sale of Scientology books. He did leave, disillusioned, in the end and wrote a book on it, which really is (for me having worked in all three branches of Scientology - Pubs, admin and auditing) a quite thrilling story. The book (based on a blog Jeff first ran) is called Counterfeit Dreams.

After he published Counterfeit Dreams, Jeff, concerned at how many had fallen into the same trap as he, the Scientology organisation, started a blog to help people leave Scientology, and this he then published as a Kindle book with the title Leaving Scientology. Though I have been out of Scientology for thirty years and studied Scientology as a cult and cults generally quite a bit, I found new food for thought in this book.

Jeff is now about to publish a book on Scientology ethics, and I will probably brings this profile up to date when I get and read it. Got it - will read. Hawkins, Jefferson (2015-02-17). Closing Minds: How Scientology's "Ethics Technology" is Used to Control Their Members - Hawkeye Publishing Company. Kindle Edition.

A contraction or shortening of the word administration, admin is used as a noun to denote the actions involved in administrating an organization. (Modern Management Technology Defined (C) 1976).