I think part of that analysis should include studying the reasons/motivations for why it switched from “therapy” to “religion” as it did back in the 1950s. I found an interesting letter, recently, from John W Campbell who was there in the thick of it all. As you probably know, he had been a Board member of the original Hubbard Dianetics Research Foundation in 1950/1951, and aside from an excellent overview of how “unprofessional therapy” was received in those days, he made this remarkable statement:

It was, as a matter of fact, I, not Ron, who originally suggested that Dianetics should be dropped as a psychotherapy, and reconstituted as a religion. 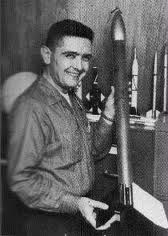 Here’s a larger excerpt from the same John W. Campbell letter dated May 16, 1956 to Harry Stine to give some context: - Margaret

Also, I’m well aware that you consider yourself a mild and gentle man. I, of course, know that I am, also. Only you should ask some of your friends what they think. My friends are all sure I’m an authoritarian, dogmatic, absolutistic, iron-headed dictatorial old bastard.

“Dr. Bndgeman, in some of his extreme pressure research, made the interesting discovery that he could extrude hard steel into a rubber mold by running the pressure above 200,000 psi. The steel flowed then—and the rubber didn’t.

“You and I, my friend, are like rubber—nice, mild, gentle stuff . . . until the pressure gets on. Then the best grade of tool steel starts getting squeezed into the shape the rubber holds.

“Peg put the whole problem in a nice, neat phrase. (Having encountered it she was in an excellent position to do so. Betcha your beloved wife will like the phrase too.) She said I had ‘the inexorability of a saint.’ That’s the other side of patience, you know.

“The language channel is completely inadequate, and is going to stay that way, since it isn’t designed for us or our type.

“Of course I’m an amateur; after 30 years of being a professional amateur in the fields of science, what would you expect me to be?

“And one of the troubles with your evaluation of things is that you never really caught on to what happened in and with Dianetics. PsychoIogists, not the original Dianetics gang, forced it to assume a professional aspect — when it wasn’t ready. That’s why I got out of the group; I’ve continued during the subsequent years to follow the original amateur research line. Its been enormously effective, too.

“What you fail to realize is that only religion of all fields of human thought is allowed to be an amateur research. Hubbard’s finally gotten the problems swung around—too late, and in a half-ass fashion— into a religion. 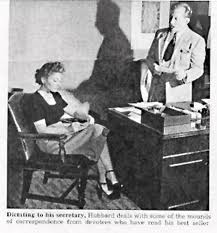 Ron Hubbard had most excellent opportunities to institute some Grade A juicy libel suits. It’s a shame, really, that he didn’t have the cash on hand to get the process started, because he could have made a couple of millions just suing psychiatrists and psychologists across the country for libel and slander.

I know for a positive fact—and have had written, signed letters to prove it —that psychiatrists were telling their patients that Ron had been committed as insane after Dianetics was published. That constitutes an open-and-shut case of slander and/or libel. Because Ron, just for the record, had gone to the University of Chicago psychometric department, and had a very fine and completely clear record, and had not been institutionalized after Dianetics was published..

Though I’ll admit, the psychiatrists damned near did make it come off, for a while.

I dropped out of the rat-race, and strongly suggested that Ron do likewise, when it became abundantly clear that there was no use trying to accomplish anything that way. It was, as a matter of fact, I, not Ron, who originally suggested that it should be dropped as a psychotherapy, and reconstituted as a religion. Because only religions are permitted to be amateurs.

And it took thousands of years, and vast human suffering, to achieve that. There’ll come a time when science fiction will be an orthodox literature and only properly trained professionals will be considered fit contributors. It’ll probably be under governmental regulation, too— because it will be recognized for what it is: a major cultural tool for reshaping the thinking of the more imaginative and creative citizens, from which group the future leaders inevitably arise.

There will then follow a long, long, period before science fiction, having been completely surpassed as a tool of education, will be freed to be an amateur field.

a problem is postulate-counter-postulate, terminal-counter-terminal, force-counter-force. It’s one thing versus another thing. You’ve got two forces or two ideas which are interlocked of comparable magnitude and the thing stops right there. All right, now with these two things one stuck against the other you get a sort of a timelessness, it floats in time. (SH Spec 82, 6111C21) 2 . a problem is a postulate-counter-postulate resulting in indecision. That is the first manifestation of problems, and the first consequence of a problem is indecision. (SH Spec 27, 6107C11) 3 . a multiple confusion. (SH Spec 26X, 6107C03) 4 . an intention counter-intention that worries the preclear. (HCOB 23 Feb 61) 5 . a problem is the conflict arising from two opposing intentions. A present time problem is one that exists in present time, in a real universe. (HCOB 3 Jul 59) 6 . something which is persisting, the as-is-ness of which cannot be attained easily. (PRO 16, 5408CM20)