In early June 1976 Marcus Swanson and I were security guards at a warehouse in Tampa when we got orders to pack our bags. Marcus, Mark Ferriera (AKA: Muff) and I were flown to L.A. then picked up by the G.O. and driven to WHQ (Winter Head Quarters) in La Quinta near Indio/Palm Springs. WHQ was actually a complex of individual houses located directly behind the famous La Quinta hotel and golf course where they held the Bob Hope golf tournament every year. All the main houses fronted on ‘Obregon Ave’ just behind the hotel. There were three main properties. 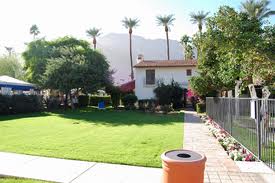 LRH always named ‘MEST’ for ease of communication. ‘Palms’ was to the west just off Eisenhower Blvd. Palms used to be owned by President Eisenhower. It was a two story building with a detached garage and guest house with a huge court yard, swimming pool, a date palm field and tennis court.

Directly to the east of Palms was ‘Olives’. Olives was the largest of the properties. Olives had a distinctive swimming pool that was used in several 60’s movies. There were orange, lemon, grapefruit and of course Olive trees everywhere. To the east of Olives was a road that led past it’s date palm field heading south to the ranch house, stables and date packing plant. Also located at Olives was a guest house with a full kitchen, one long house with two rooms and another guest room which Arthur Hubbard lived in. Again to the east was an alfalfa field, then the ‘Rifle’ property where LRH lived. (pop quiz to follow!).

The two Marks and I found ourselves baggage and all on the road to the ranch house when all of a sudden LRH and his entourage entered the road behind us. (yikes). We froze as we weren’t sure what to do. LRH told us to get some shovels and fill in the ruts in the road. Escrow had just closed and LRH had just started viewing the properties and making lists for renos, he was not living there yet, he was still living in Culver City, just outside Los Angeles at a huge apartment complex which housed his office, berthing and a small crew and a few messengers. This was called ‘Astra’.

That first summer, in one word, was FUN. We had a very special group. David and Claire Rousseau and Lois were messengers running the Renos projects.. Soon others came. Marcus and I were already good friends but I worked a lot with Leo Johnson., I knew Leo from Dunedin – King Arthurs Court.

Because of the heat (126f in the shade) LRH set our schedule to arise at 4 am, have breakfast, do up battle-plans for that day, work till 11 am and have lunch. After lunch we were to have siesta until 3pm or so then work til dinner. Many of us decided to use our siesta in the Palms or Olives pools. We usually worked after dinner until 10 or 11pm. We all became very good friends. One day at the end of the summer and renovations we were doing final fix-its at ‘Rifle’ when a man in a suit carrying a clipboard walked up and asked where our building permit was and asked who was in charge etc. Well, I am not sure just what I said to the guy but I gave him my shore story and my best no answers and he went away and didn’t return. We were all drilled in our shore stories and LRH had us choose our AKAs (phony names) .

Soon after LRH came to ‘W’ he dropped by the Ranch House where I was. A messenger came in and said LRH wants to see you. I was surprised to see him at the ranch house gate. LRH told me he had heard about the way I handled the building inspector that came to Rifle. He called me a genius. Wow! Was my needle floating! Then he told me he was going to train me up to be a big executive (gulp). I knew I was like a ripe avocado, green inside and out. I thanked him. He told me to carry on and I did, without footprints.

During those days LRH was very accessible to the crew. He used to walk around the property and you never knew when he would just show up, chat or give advice. It was great. LRH and Mary Sue lived and had their offices at ‘Rifle’. LRH drove a Jeep Cherokee four wheel drive. Once I was invited along with others to go to town to a movie. I was thrilled, being invited by the boss to goof off. I think the movie was ‘Star Wars’ .

Four green Datsun 210 cars were purchased in a fleet purchase. They were identical except for one number on each license plate. The idea was couriers, purchasers and others coming and going at different times would confuse anyone trying to determine schedules and it would make it look like less people were driving around. LRH never missed a trick. Marcus and I were the first Couriers. I had days and Marcus nights. Talk about fun. The Old Man had us wear Cowboy hats when we left the ranch (W), then take them off after we left the valley, then wear them again back to W. 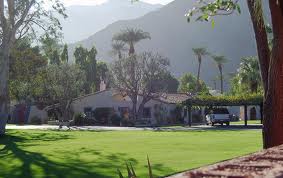 The couriers used to check oil and wash their cars in front of the stables near the ranch house. One day I was busy washing my courier car and I was whistling. I felt a presence behind me, I turned around and saw the Old Man standing there. He told me that he could always tell someone who enjoyed their work when they whistled. He apologized for disturbing me and told me to ‘carry on’.

Security and communications were very important to the Old Man. He treated the couriers with respect. He taught us a lot about protection from ‘bugs’ and tail shakes, which evolved into the security pack.

Since I was on days I got most of the new people as passengers. I don’t know who coined the phrase ‘Over The Rainbow’ but I loved it. I asked someone once and was told that every time someone disappears in the middle of the night, people would joke that they just went ‘ Over the Rainbow’. The couriers were told not to answer any questions about where they were going, etc until we were close to ‘W’. We would put people on a routing form once they arrived then give them an orientation of the property. When we went to ‘Rifle’ I always told them to be very quite so we don’t disturb the Old Man. We would never go inside but several times the Old Man heard us, even though we whispered, and he would come out to say hello. More W stories to come including ‘Cine’

1. a coined word, meaning matter, energy, space and time, the physical universe. All physical phenomena may be considered as energy operating in space and time. The movement of matter or energy in time is the measure of space. All things are mest except theta. (Abil 114-A)...More