My Passport was issued on 29th December 1980 at AOSH EU&AF by an unreadable signature who was Director of Validation. 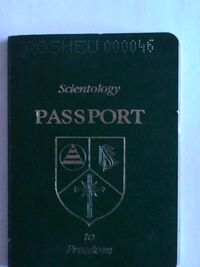 I was on course and getting auditing at the time. There was a lot of fuss about how important the Scientology Passport would be. Although I had left staff 8 years previously, I guess I was still very much in the Scientology reality, for I suspected, even though it seemed a bit unreal to me, that it would eventually replace national passports (bit of a joke, my gullableness). Actually it does say on it at on the first inside page "This passport does not replace a national passport", but I had not seen that, and there was so much talk by staff, duly promoting, as loyal followers (and perhaps with a bit of enthusiastic inventiveness), Ron's latest bright idea.

The passport cover is dark green with gold lettering and at the top of the first page is printed in letters and figures made up of dots AOSHEU 000046.

You can see scanned in pages at: http://www.antology.info/passport.php Below the words "Scientology PASSPORT" is a shield with three areas, a Dianetics symbol, a Scientology symbol, and a Scientology cross, and under that "to Freedom".

Actually, although I have never used it for any thing (after roaming round the org have things filled in) it is so badly put together that the binding is beginning to come undone.

It has some 84 pages, most of which is filled with places naming all sorts of Scientology activities one can engage in and complete, and I and others went round the org in Copenhagen, getting various staff members to fill in and sign. They had rubber stamps of different shapes which they stamped the passport with for the various activities.

Here are some quotations from the wording.

"The signature of the Holder of the Passport, on page 2, serves as an attest of Intention to become a Fully Operating Thetan (OT)."

Page 1 (the first inside right page) says in florid imitation script: "The Church of Scientology hereby requests all of those concerned to give aid and service to the Holder of this Passport to Freedom while he travels the Road to Truth up the Scientology Bridge to Freedom, to a personal destination of Fully Operating Thetan (OT)". Does any one know if passports were issued with "she" instead of "he" in that sentence?

Page 4 (excerpt): "This passport may be renewed by the holder for an unlimited number of lifetimes, by claiming a new Passport with a new name each lifetime. This will be verified and validated by the Examiner. Thus one keeps a record of his journey to Freedom."

On page 6 (big laugh, this) it states I have a Lifetime International Membership (laugh, because that membership, which gave discounts on books and, I think, auditing stopped issuing discounts, and you had to be a member of something else to get discounts (or even auditing – I have lost touch with "Church"reality).

On page 7 it states "With this Passport you will now travel much faster on your Road to Freedom, as it lays out before you the journey to be taken in its straightforward entirety, and therefore assists you in putting order into your progress in Scientology."

From Page 18 on there is a list of LRH Tapes, with lines on the last pages for additional tapes.

Page 33 starts Processing Bridge with blank spaces for Public Division Co-audits --- etcetera ending at page 78 to 83 concerning folder, where on the 2nd Jan. 1981 Per Lund (a pleasant Danish man I remember) signed that my folders had been received with on that date and on to page 83, 24 places for an org or mission staff member to sign that thy had received my folder.

We are getting near the end of this adventurous spiritual travel passport. Page 84 states:

IMPORTANT INFORMATION
DURATION OF VALIDITY OF THIS PASSPORT

The Passport to Freedom is valid for the duration of this Universe. (My comment – I did not realise it might take that long :-) )

LOSS OR DAMAGE OF PASSPORT

Should this passport to Freedom be lost or badly damaged and a new Passport is required, the Holder must report to his local Scientology Org and make a request for a new Passport. This will be issued him for a new validation fee. All entries in the Passport will be re-entered by the presentation of certificates, or as validated by the Examiner and authorized terminals.

IF TRAVELLING IN ENTURBULATED SPACES

If you must travel in enturbulated spaces, or be in the company of Suppressive or enturbulative persons it is important to keep a good communication with you HAS, EO or MAA.

The last page (inside back cover) contains just the often quoted bit by Ron starting "I'll not always be here on guard. The stars twinkle in the Milky Way" etc. with his signature. The back cover is just plain dark green.

I guess all that read this will be rushing to their org for their Passport to Freedom. Wonder what the staff will say. Just show them this and tell them it was an LRH order.

Antony A Phillips 11:04, June 4, 2014 (MDT) After I had written the above, I began to wonder whether this Passport was a world wide thing, or whether it was a Pilot Project in AOSH EUAF alone. However I got the following comments.

Further, a correspondent wrote me: "On the passport – I don't really have any data - I do however have a passport!!  Lying around somewhere in a tin or a box.  About two entries I think.  It was just a fad and didn't last long at all.   I remember being up in Qual during my last stint on staff (about 2012 or so) when someone found an old dusty cardboard box that had about a dozen passports in it that belonged to various people. I presume they were eventually thrown in the trash bin!!  Not a very long lived fad nor taken very seriously. "

1. a thetan exterior who can have but doesn't have to have a body in order to control or operate thought, life, matter, energy, space and time. ( SH Spec 82, 6611C29) 2. willing and knowing cause over life, thought, matter, energy, space and time. And that would of course be mind and that would of course be universe. ( SH Spec 80, 6609C08)...7. this state of being is attained by drills and familiarity after the state of Clear has been obtained. A real OT has no reactive bank, is cause over matter, energy, space, time and thought and is completely free. (HCOB 12 Jul 65)...more

1. the route to Clear, the Bridge , which we call the Classification, Gradation and Awareness Chart. (Aud 107 ASNO) 2. a term originating in early Dn days to symbolize travel from unknowingness to revelation. (Aud 72 ASNO).