Born: 31st December 1929 (and thus survived about two hours of the roaring twenties), in Cowes, Isle of Wight, England.

Nationality: British (since 1969 resident in Denmark where dual nationality only became possible in 2014, I have passed the tests required for Danish nationality, I am waiting the passing of the appropriate act in the Danish Folketing making me a citizen).

No spouse, no children. (three 2Ds, the first homosexual, the other two bisexual)

Went to English private schools until 17 years old (changed school a bit because of war).

Trained evening courses as an optician.

Three or four years in late teens, early twenties was a Christian, where I had aspirations to be a minister and began part time training as a Local (lay) Preacher in the Methodist Church.

First heard of Scientology at Easter 1954, weekly auditing from Dennis O'Connell, HPA Course August 1955 (evenings) to January 1956 (day course) followed by six months completely unsuccessful attempt to have a "Scientology practice" in Surbiton, Surrey. I was on the first (so we were told) public trial of what was to become comm course: December 1956.

After that I tried (again) to set up a private practice with two of the weekend course HPA students, the Colemans, in Pinner, Essex. Again unsuccessful. In this period I worked as a part time postman (morning round) and in the afternoon "helped" Ray Kemp[[1]] in Golders Green with a project he was doing for Ron, using Objectives on mentally handicapped children. 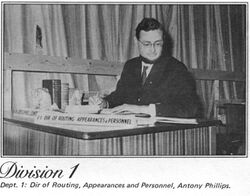 Saint Hill Manor, about 1966 (Picture from The Auditor of about that time)

Moved to Swiss Cottage (still trying to build a practice) where I audited one 25 hour intensive (mother of a Day HPA student). Then got a job with Alfred McConnochie in his TV Hire shop in Clapham, London, where I did a very little auditing (evenings on the first floor). While there I went up to HASI London three evenings a week for co-audit – marvelous. While there I saw an advertisement (in the hallway of HASI London) for a job at Saint Hill Manor and got it.

Started at Saint Hill August 1964 (Central Files and Addresso) replacing Joe (a young lad, I think Breedon, possibly Breeding, but not the little older man that worked on emeters, who came to Pubs Org later) as he wanted to go back to the USA. Quite a complicated story at Saint Hill and I refer you to my Home Page (Antology.info) 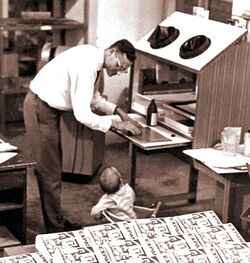 On January 1st 1968 I (and some twenty or thirty others) were suddenly moved to a completely new organisation Publications (again see my home page). This moved me to Edinburgh, Scotland and then Copenhagen, Denmark.

I had two 2½ year contracts, when the last one was up the organisation had changed a lot, and I was not willing to continue (either in Pubs or the Sea Org, which Pubs at that time had begun to copy). I got a job with a Danish insurance company on 1st March 1971, and did my little best to be a good Scientologist.

I left that job on 31st of October 1979 to do a ridiculous job for Pubs Org in England, which needed some one at least on OTIII to do. When I came back I did two levels of the Briefing Course full time (getting NOTS auditing at the same time, being called for when my auditor was ready for me), and then the Happiness Rundown Course and Internship (that really was marvelous). I had inherited some money when my mother died, but this ran out. I was working at a poorly paid night job (the phone man in a very tiny Taxi firm). In a most peculiar way (from my standard Scientology viewpoint) I got verbally declared Suppressive (at least I never saw a Suppressive Person Order). I have not got round to writing that up for my home page, but it and later events will be written up (if my body lasts that long).

Briefly in the years after I was thrown out I had various jobs (including in the computer area), had communication with many Danes who were out of the Church of Scientology, and amongst other things we came to issue a Danish magazine Uafhængige Synspunkter (Independent Viewpoints). I started fairly junior, but as other people dropped out I tended to take on their hats :-) . I had a job with the company that introduced the first Desktop Publishing programme to Denmark, and when the person who was able to get us photo typesetting done (from simple text files) left the area, I asked my boss if I could use their equipment for an Independent Scientology magazine and he said yes – so I got that "job" too – on Sundays when there was no one around to help me :-)

There was a demand for an English speaking Independent Scientology Magazine (all of those that existed, except Free Spirit, had apparently died), so I started International Viewpoints (commonly called IVy, see http://articles.ivymag.org/). As time went on more and more technologies came to help, the most significant being Internet) and that helped me get lots of helpers around the world (many of whom, for various reasons, don't want their names published). In connection with that I set up an Internet list for IVy subscribers, and I also set up a few other internet lists.

IVy is now closed, and I am really working on ending this life cycles as tidily as possible (there seem to be all too many :-) ).

I have always had an interest in music, and that is taking increasing attention, with a marvelous concert hall within an hour's train ride, and very good public radio channel (24 hours a day with mostly classical music and talk on and about music and musicians). Since coming to Denmark I have taken an interest in cycling (it is a marvelous country to cycle in). Early a (now dead) Scientologist who stayed in the "Church" introduced me to running (later sometimes called "jogging") which I still do a bit in a very slow and amateurish manner. I have friends, both in Denmark and abroad who I keep somewhat in touch with.

A couple of years ago, three interviews were made of me, which are on YouTube. They are in Danish, and thus rather irritating for those who do not understand Danish, and they are (from my side) a bit amateurish. Two years later, I have managed to get English interviews (see below) which I am happy about.

In some ways I feel I am unique, having been an observer of Scientology and its changes over many years, having had experience in Tech, Admin and Pubs Org, all my friends and acquaintances have had positive experiences with (Meta)Scientology, – and being rather odd anyway :-).

My Scientology Story is Here

Advanced Clinical Course - ACC - one of a number of theory and research courses delivered by L. Ron Hubbard during the years 1953 to 1961, which gave a deep insight into the phenomena of the mind and the rationale of research and investigation.

2. a person who rewards only down statistics and never rewards an up statistic. He goofs up or vilifies any effort to help anybody and particularly knifes with violence anything calculated to make human beings more powerful or intelligent. A suppressive automatically and immediately will curve any betterment activity into something evil or bad...More