L Ron Hubbard's Dianetics and Scientology books have been altered from his original writings and publications, and not for the better - the proof is in this and related articles attached.

“SCIENTOLOGY: THE FUNDAMENTALS OF THOUGHT”

As you review this report, please keep in mind what David Miscavige said about Fundamentals of Thought during the Basics release event in 2007:

"...because when it came to a secretarial malfunction, the one responsible for this is a gold star standard. However, as with the previous books, Fundamentals of Thought has been brought back to source with authority – from its introductory chapters straight through to the end. Indeed, the restoration work here was so extensive, it hardly matters how many times you've previously read this book, you are now going to get it for the first time and with ease."

(2:15:35 time mark on the DVD or 2:13:20 mark on the streaming version of this event – Golden Age of Knowledge: The Basics – available for free at your nearest Church of Scientology or on its website at: http://www.scientology.org/david-miscavige/basic-books-and-lectures.html)

The very first (1956) edition of The Fundamentals of Thought was also available for this review and was found to be basically the same as 1973 publication used in this report.

Nearly all direct references to Scientology being a SCIENCE were removed and in some instances replaced with a word RELIGION. Except for a standard declaimer at the beginning of the book defining Scientology as “an applied religious philosophy,” there is no single mention of Scientology as a “religion” in the original text of The Fundamentals of Thought. On the other hand, Ron Hubbard used the word “religion” throughout the book to refer to traditional religions as it is commonly understood. Examples:

“There is no argument whatsoever with the tenets of faith since it is not precisely stated, uniformly, by religions that one immediately goes to a heaven or hell.” (page 66 in 1973 edition or altered version of this sentence on page 77 in 2007 edition)

“One protests against the physical universe only when he feels that he can have no part of it or does not belong in it or, as in religion, is not looked upon kindly by what he conceives to be the Creator of the physical universe.” (page 74 in 1973 edition or page 88 in 2007 edition) 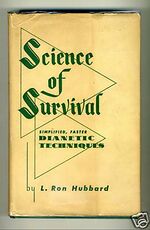 Examples of alterations cited below are by no means a list of ALL alterations that can be found in 2007 Fundamentals of Thought. Alterations not included in the list below include BREAKING DOWN or COMBINING PARAGRAPHS and CHANGING PUNCTUATION which result in a loss of conceptual concentration and disrupt the thought flow of the original author who is L. Ron Hubbard, not any other individual or a corporate entity. Such alterations diffuse the thought and lead to a significant reduction in conceptual understanding, not its improvement.

Example of alterations in punctuation:


[Starting a new sentence with “For” which is really a continuation of the thought from the previous sentence is a sign of poor grammar.]

Read the original version with a comma (pause) and a single sentence at the end. Read the “corrected” 2007 version and notice the difference of how a “mere” change in punctuation results in a significant disruption in the flow of author's thought.

The list below also does not include SPLITTING MATERIAL within one chapter into several chapters or moving sections of text into a different chapter. This again leads to disruption in the thought flow of the author and results in a loss of full conceptual understanding on part of the reader.

For example, in the original version a more concentrated explanation of self-determinism and pan-determinism appeared toward the end (pages 50–51) of Chapter Six “The Reason Why” which introduced the concept of life as a game along with its component parts: freedom, barriers, and purposes. The concepts of self- and pan-determinism are lightly introduced mid-way in this chapter and then explained in more concentrated form toward the end of the chapter. In 2007 book, these two sections have been taken out of Chapter Six and moved toward the end of the BOOK in its own, separate chapter – Chapter Fifteen – where it does not even belong. This “Chapter Fifteen” was placed within a more general section titled “Part Two Scientology Processing.” There are no processes cited in “Chapter Fifteen”. It is merely a more concentrated definition of self-determinism and pan-determinism, and it belonged where these concepts were first introduced – in Chapter Three “The Reason Why."

Another example of this is Chapter Twelve of 2007 book titled “Beingness, Doingness and Havingness.” In 1973 edition this was originally included in Chapter Three “The Conditions of Existence” (starting on page 27) as a more thorough conceptual understanding of the conditions of existence (be, do, and have) and how this is applied in Scientology processing. Chapter Three in the original 1973 was TEN pages. It is barely two in 2007 version leaving the reader “incomplete” in terms of truly understanding “the conditions of existence” until he reaches Chapter Twelve by which point the flow of conceptual understanding has already been interrupted.

Note! Bold formatting in citations was added to highlight key areas of alteration.
Square brackets - [ ] - were used to insert notes where needed.

[Alteration highlights: the very definition of the subject was changed, key sentences were removed, new sentences were added, a word “science” replaced with a word “religion,” a word “can” was arbitrarily inserted in “can improve” as opposed to “improves”]


It is noted here that the section defining the subject of Scientology was already severely altered in the first edition of Fundamentals of Thought under the new copyright “L. Ron Hubbard Library” in 1988. The text there went as follows:

You see that already in 1988 it sounded quite convoluted. Even though a detailed comparison was not performed for 1988 edition, on the surface it looks much more in line with 1973 edition in other areas of the book. The word SCIENCE was still preserved in many places in 1988 edition where it was senselessly removed in 2007 edition.

A History of Man - Alterations

[Word “bisexual” was removed and the third sentence was broken into two.]


[Full sentence was removed emphasizing Scientology as a science; the first letter of the word “Infinity” was de-capitalized in the first sentence.]


[also note: first letters of words “Dynamics,” “One,” and “Four” were de-capitalized]

[The paragraph referring readers to Dianetics 55! to learn about communication was removed and instead a small footnote was added at the bottom of 2007 edition:
“ *The complete manual of communication is Dianetics 55!”]
[First letters of words “Affinity,” “Reality,” and “Communication” were de-capitalized.]

[The last sentence was dropped, first sentence – broken down into two making it harder to understand and again resulting in very poor grammatical structure.]

[Word “science” was replaced with a word “religion.” The sentence about case history files in Washington D.C. was removed.]

1. an impulse or direction of energy particles or thought or masses between terminals. (HCOB 3 Feb 69)...more

1. any one of the eight subdivisions of the dynamic principle of existence-SURVIVE. (PXL, p. 49) 2. dynamic is the ability to translate solutions into action. (HFP, p. 171) 3. the tenacity to life and vigor and persistence in survival. (DMSMH, p. 38)

there could be said to be eight urges (drives, impulses) in life. These we call dynamics. These are motives or motivations. We call them the eight dynamics. The first dynamic -is the urge toward existence as one’s self. Here we have individuality expressed fully. This can be called the self dynamic...more