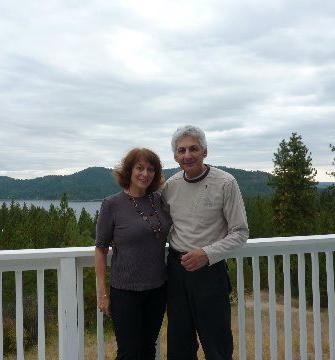 Frankie and Mary were on the ship with LRH where they were both trained by him on the first Class 8 Course. Frankie was the first "personally certified by LRH" Permanent Class 8 Auditor and C/S. Aside from doing various missions directly under LRH, he also sent Frankie to all the orgs to "certify or cram" the Class 8 C/S's around the planet, which he did. Around 1969 - 1970 Frankie was the Senior C/S of AOLA. During that time he made well over 100 Clears. Around 1975, he became the Qual Sec of the Flag Service Org. LRH trusted Frankie to such a degree that he was assigned as Diana Hubbard's personal auditor for a year.


In 1982-83 Frankie and Mary left the church. Their parting words were, "when you start applying your own codes and creeds, we'll talk". They never looked back.


Besides Auditing and C/Sing, Frankie loves to train students on the Tech. He excels as a Training Supervisor and is happy to say that there is nothing more important than making auditors who know the subject, and can keep the tradition of delivering the Tech going well into the future.


As contracted staff at the NY Org, Mary did the Saint Hill Special Briefing Course in England and then went on and completed the Class 7 course and Internship. She was then sent to the Flagship for the first Class 8 Course where she was directly trained and CS'd by LRH.
She returned to NY as Class 8 Qual Case Supervisor (CS) and later became the first CS of CCLA and CCNY. She trained and interned as an HRD auditor and C/S too at Flag in Clearwater, where she completed the Ethics Specialist Course. Frankie was also on that first Class 8 course, and worked directly under LRH on several missions, Mary and Frankie also both specialize in delivering OT Reviews and upper levels.


Here is a little background regarding "Mary's Ethics/Integrity Program". In the 70s, Mary was delivering lots of ethics cycles in the field. People were clamoring to receive her ethics program. She was hatting other people to deliver it because she could not keep up with the demand. The hatting of others is what got the attention of the orgs. She was told to stop hatting people to do Ethics in the field, was accused of squirreling, etc. They couldn't hit her because of her stats. She made her stat "number of people back on lines at the orgs and onto their next action". Her stats were in Power. But they still kept trying to stop her. So she went to Flag to petition to be allowed to continue to deliver the program and hat others to deliver it. This was in 1977. The first thing she did at Flag was sit down with a friend who wanted to help, and backed up every line of the ethics program she was delivering with an LRH reference. Basically, she wrote up the hat. She turned in her "ethics program" along with a CSW up to LRH, and then waited on pins and needles for several days. Finally, Liz Gablehouse, LRH's Personal PRO, came to her. She told Mary, "It's ok. Go ahead and hat people". That was that.
In PT Mary delivers ethics workshops as well as the program one on one. She trains people to deliver her program, but there are two prerequisites: they must be trained auditors and they must receive the program before being hatted on it.
Mary and Frankie are currently working in Coeur D'Alene, ID in association with the Warrens.

EmbedVideo was given an illegal value for the alignment parameter "height=370". Valid values are "left", "center", "right", or "inline".

The Class VIII Course teaches exact handling of all cases up to 100 per cent result, as well as Class VIII procedures, all case setup actions, all processes and corrective actions, as well as flubless Class VIII auditing. (Dianetics and Scientology Technical Dictionary (C) 1975)

An advanced Scn course available to Sea Org auditors only and is taught on Flag. It teaches L-12, the Flag OT executive Rundown. (Dianetics and Scientology Technical Dictionary (C) 1975)

A case supervisor direction of what to audit on a pc. (HCOB 23 Aug 71)

1. that person in a Scientology Church who gives instructions regarding, and supervises the auditing of preclears. The abbreviation C/S can refer to the Case Supervisor or to the written instructions of a case supervisor depending on context. (BTB 12 Apr 72R)...MORE

Abbreviation for statistics. A number or amount compared to an earlier number or amount of the same thing. Statistics refer to the quantity of work done or the value of it in money. (HCO PL 16 Dec 65)

Abbreviation for statistic. A number or amount compared to an earlier number or amount of the same thing. Statistics refer to the quantity of work done or the value of it in money. (HCO PL 16 Dec 65)

Each org staff member is a specialist in one or more similar functions. These are his specialties. If he is fully trained to do these he is said to be hatted. (HCO PL 28 Jul 72)