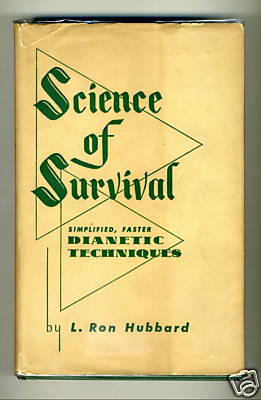 This is the chart that goes along with the Science of Survival book and is referred to extensively and continually within the book. This is a big chart and has columns going from A thru Z and AA thru AR. You can download it here in 4 parts in the order of the columns.

The first edition varies in some details from the free download link above.

It is a thick hardcover book measuring 14.5 cm x 23 cm with a plain green cover (there is writing only on the spine) and the endpapers are yellow. Most noticeable to my eyes and others at the time was the fact that the first printed page begins a 23 page "Publishes Introduction" which includes some graphs (Personality Inventory, Summary of Gain in Intelligence Scores, et cetera.) which is signed by the "Editorial Staff, Hubbard Dianetic Foundation".
The next right-hand page is the title page of the work "Science of Survival, Simplified, Faster DIANETIC TECHNIQUES". It has a logo of the Hubbard Dianetic Foundation, a triangle in a circle, and the publisher "The Hubbard Dianetic Foundation, Inc., Wichita, Kansas, distributors. It is published by Wichita Publishing Company., 451N.Main St., Wichita, Kansas.
The next (left hand) page is the usual data on copyright, printings and printed in the USA.
The next page has the dedication "To ALEXIS VALERIE HUBBARD For Whose Tomorrow May Be Hoped a World That Is Fit to Be Free.".
The next left hand page is blank.
The next right-hand page starts with "Acknowledgement is made to 50-thousand years of thinking men without whose speculations and observations the creation and construction of Dianetics would not have been possible. Credit in particular is due to: Anaxagoras, Thomas Paine, Aristotle, Thomas Jefferson, Socrates, Rene Descartes, Plato, James Clerk Maxwell, Euclid, Charcot, Lucretius, Herbert Spencer, Roger Bacon, William James, Francis Bacon, Sigmund Freud, Isaac Newton, Cmdr Thomson (MC) USN, van Leeuwenhoek, William A.White, Voltaire, Will Durant, Count Alfred Korzybski, and my instructors in atomic and molecular phenomena, mathematics and the humanities at George Washington University and at Princeton.
The next page is blank and the following page numbered xxxi begins the table of contents.
Page xxxv starts with the Goal of Dianetics, and an Introduction, which are combined into one in the link given above here.

Amongst people I met in the mid and late 50s there was a supposition that this very unusual beginning of the book (not beginning with the title page) was copied from Count Alfred Korzybski's [[1]] book "Science and Sanity", a book which was quite well known at the time amongst the people who might be interested in Scientology and Dianetics.

In 1951 L. Ron Hubbard published five books. They are in order of publication: