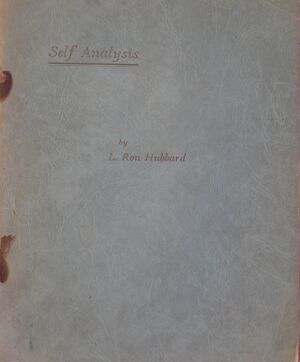 The cover to the right is of the first edition which was dated August, 1951, the book was slightly larger than average 21.5 cm x 27.5 cm, soft cover which was a light green with the little pattern with lettering in gold and it was published by The International Library of Arts and Science.

The first edition has the following little paragraph which does not appear in the edition we refer you to above.

Do not hearken too well to he who would tell you this system will not work. He would not feel safe if people around him grew too strong. The wise man tests before he talks. The critic but follows the fad of a cynical and apathetic age. You have a right to your own opinion. This system works or it doesn't according to your experience. Not all the authorities in Christendom can alter natural law.

After Easter 1954 I was sent by my father to get auditing from Dennis O'Connell. Dennis was a leading field auditor/Scientologist at that time and is referred to quite a bit in the reminiscences of Dennis Stephens[[1]]. I was working in Cambridge at the time but came in to London every Thursday (early closing day in half the shops in England) for extra study and in the evenings I went and got a couple of hours auditing from Dennis O'Connell. I was told by Dennis O'Connell to get a copy of Self Analysis and self audit it at home in between the sessions I got from him. My mother was getting sessions from Olive O'Connell, Dennis's wife, and was also instructed to self audit using Self Analysis. We each bought a copy of Self Analysis which was published in England by Derek Ridgeway (as was the English version of Dianetics Modern Science of Mental Health ). It was a small hardcover book about 14 cm x 21.5 cm. At that time there was nothing objectionable about self auditing, including self auditing from a book, and it was only later that there grew quite a strong prejudice against self auditing. For my part I don't think I had much result from it but then, 60 years ago, I was a pretty dug in sort of a case ("out the bottom" was a term we used then!). Fortunately most of the auditing I got from Dennis was objective processes (Opening Procedure by 8C) and my memory of that was that I spent most of the sessions doped off (semiconscious).

In 1951 L. Ron Hubbard published five books. They are in order of publication:

Use these Links to Amazon and Ebay to Get the Lowest Price on Scientology Materials.

The digital download is offered here free but has the drawback that it is not easy to use the auditing processes from a digital format.

If you're truly interested in improving your life and want to learn to audit, we recommend you get a hard copy of the book to work with.
Free Download

Learn the basics of Scientology and how to audit yourself. Many find it an easier and more fruitful first step and easier to learn than Dianetics procedure.

Self Analysis contains hundreds of processes that are easy to apply and designed to change your life, your outlook, you mood, your relations with others...and give you an emotional boost from the comfort of your own home. 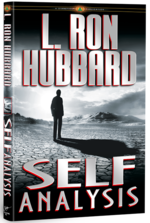 Self Analysis - Click image to get your copy at Amazon